"Music is a higher revelation than all wisdom and philosophy,
it is the wine of a new procreation, and I am Bacchus who presses
out this glorious wine for men and makes them drunk with the spirit."
-Ludwig van Beethoven-

I graduated with a Master Degree in Fine Arts (majoring in Illustration and Book Design) in 1981 under the guidance of Prof. Roumen Skorchev. After graduating, I continued to work in the areas of illustration and printmaking.

Since Art expresses high ideals through beauty, a good mastering of the craft is needed (in addition to other things). What has always interested me, however, are the colours. As a child the colours attracted me strongly and I studied the paintings of the Old Masters, looked at the hues of the flowers and the Nature as a whole. So, I have always desired to study oil painting.

Indeed, I have always wanted to make colours. After numerous experiments, in 1985 I finally achieved an innovative and unique technique through which I found a way to make colours in the intaglio (engraving) process. In principle, bright colours in printmaking are very difficult to achieve, except manually or with lithography. A friend and colleague of mine from Austin, TX, who is also a lecturer in printmaking, pointed out to me later that my technique is very similar to the "a la poupee” technique of the Old 16th century French engravers. The name comes from the French word for "doll", since they used a small rag ball wrapped with leather for spreading the ink. Well, I did not use a doll, and despite the similarities, the technique I created is unique in itself.

All my wine labels are also done using this technique. My first series of prints after the Old Dutch Masters was created with this technique, and the works were acquired by the Pushkin State Museum of Fine Arts, Moscow and the National Art Gallery, Sofia.

In February 1993 I moved to Australia. In 1994 I made the first exhibition of my prints in Australia in BMG Gallery, the best gallery in Adelaide at the time. What allowed me to make this exhibition then was the generosity of an old British lady who kept an art-supplies shop 50km out of the city – her act of faith and love for art was unforgettable for me. The exhibition turned out to be very successful – all the works (except one print) were sold-out by the end; this allowed me to purchase the specialised materials I needed to continue with my printmaking work.

In 1995 I was offered to make one of the Queen of Clubs (Semillon) labels for Peter Lehmann Wines, which marked the beginning of a number of commissions for wine labels that I made over several years. The Queen of Clubs label used on the Semillon wine for Peter Lehmann has now become quite famous, with a controversy about its export to the US well documented on the internet by Peter May. Other labels included Shiraz Grenache for Peter Lehmann Wines and a label for Brangayne (whose story is on the Brangayne site). The Brangayne label shows the preparation of the Drink of Love; it was used in different designs for various wines.

A series of four labels after Irish legends for Setanta Wines was my last project in this area. I enjoyed researching Irish mythology very much, but I must admit that it was very difficult to create an image reflecting the time, since all that is left from this period are crude rock drawings, which are not always very clear. A lot of imagination was needed to create a heroic and fearful image of Setanta – a hero from the Irish legends – while preserving, at the same time, the beauty of the good deeds and the necessity of lightness in the images, so that people would wish to try the wines and not be scared away by a ferocious-looking Setanta!

My labels have a certain place in my ouevre, as do my prints. However, I have always found that printmaking is limited by its technology and does not allow me to express what I wish. Thus I decided that I must once and for all turn to oil painting as the correct medium to express my ideas. I thus began to paint, learning the necessary techniques as I went along, with an emphasis on the Old Masters – or at least, in the way that I thought their technique can be adapted in our time. Soon enough I realised that what I had acheieved in printmaking with the invention of a new technique was actually my desire to bring the colours and world of painting to the printmaking medium. Painting now became my artistic expression in a way that I felt it should have always been.

As my ideas developed, I also began to create my works using classical music. I have always enjoyed working with music, even as a student; but I discovered that in classical music there was something that would coincide with my works – when the music is sublime, one is taken into a world of lofty thoughts and pure feelings that is a reflection of something inherently human, and at the same time completely Divine. Of course, it is not just the music that affects the work – the music must be suitable for the idea that I have; also, the performance is of the greatest importance, since only a good performance can extract from the silent score the true "vision" of the composer. "Musical Offerings" (2001) in TVH Gallery, Sydney, contained my first attempts to use music in such a way; since then this has become integral for me. Thus I turned to music for inspiration, and also to the Old Masters – two influences that are undeniable in my art, which, in all other respects, is unique in itself. 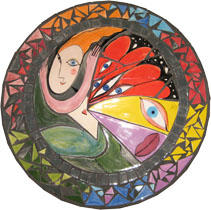